A certain French cheese has been receiving a lot of attention recently. Since Raymond Blanc covered Marcel Petite Comté on his series, “The very hungry Frenchman” two weeks ago, UK sales of the cheese have soared. That evening Comté trended on Twitter - #TheRaymondBlancEffect. And rightly so. Comté is far and away one of the most diverse French cheeses, with layers of complex flavours and aromas. But of equal interest is the production of the cheese, and the strong links in the chain of milk farmers, cheese makers and affineurs.


British farmhouse cheese tends to be produced using single herd milk, on the farm, where it is ripened and sold ready to eat. The system which is established for Comté production is quite different, and controlled with rigour. Milk is produced by some 3000 small scale farmers, whose herds are seldom more than 30 cows, but often as low as 12.


95% of the cows are the Montbéliarde breed, with the remaining 5% of milk coming from the Simmental. Each cows must have 1 hectare of pasture during the summer grazing months. The milk is sent to the local fruitière – the dairy where the cheese is made. 170 fruitières are dotted around the Jura Massif and the Haut-Doubs, the two departments of the France-Comté region in Eastern France where Comté must be produced, and can only process milk from farms within an 8 mile radius. This co-operative system of production has been established for a thousand years, and has ensured that Comté cheese is can only be made on small scales, crucially by limiting the zone in which milk can be used by each fruitière and ensuring an extensive method of milk production.


The recipe for Comté is just as protected as the milk production, essentially each fruitière makes the cheese to the same method, in copper cauldrons, traditionally heated over a fire of spruce.
Compared to a British territorial cheese, the Comté recipe is very quick, with the milk being heated to 40°C and a solution of whey which has been used to rehydrate strips of calves stomach to extract rennin for the coagulation. Once the milk is set, the curd is cut and heated to 53°C, being constantly stirred rapidly to speed up syneresis (expulsion of whey from the curd structure). The curd will shrink to the size of rice grains, and have little acidity development at this stage, remaining sweet. The natural starter has a balance and range of microflora very specific to the indervidual fruitère, giving each fruitère a defined flavour profile.


Once the cheesemaker has made the cheese, he sells the fresh cheese to the affineur, who takes care of the ripening of the cheese, before selling it on to the cheese monger. It is the affineur who uses his senses to judge the cheese, and how is best to take care of each batch of cheese he buys.
Marcel Petite is generally regarded as the best Comté affineur, and the cheeses matured at 1500metres altitude in the Fort Lucotte de Saint Antoine are the very highest quality. It was in 1966 when Marcel Petite purchased the fort (which was built in late 1800s to protect France again Prussian invasion from nearby Switzerland). Marcel Petite developed a new method of maturing Comté cheese, using the naturally low temperatures of the stone fort to age the cheese slower, and for a longer period of time. This changed the nature of the cheese in two ways: a low temperature reduced the likelihood of “eyes” forming in the body of the cheese as a result of yeasts activity, and a greater complexity of flavours from increased enzyme activity over a longer time period. 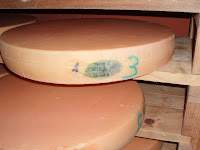 Today, the fort at Saint Antoine houses over 100,000 40KG wheels of Comté, selected mostly from the higher altitude fruitières, each cheese bearing a casein label with the producers details. A team of robots patrol the aisles between highly stacked shelves of cheese, turning, dry salting, brushing and washing the cheeses. 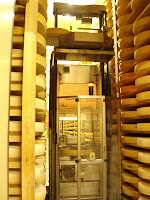 The one part of the affinage of the cheese the robot can not, and will not ever be able to, is to test the cheeses, a highly refined skill of a small team of tasters, lead by the “chef de cave” - Claude, who “rings” each wheel regularly, by stroking the rind of the cheese in a circular motion, feeling the crust, followed by repeatedly knocking the cheese from the centre outward with his cheese iron, listening to judge the density and texture of the curd – keeping watch for cheeses with cracks or holes forming. The cheese iron is plunged into the paste, turned 180°C, and pulled out to reveal a golden sample of the cheese. The sample is sniffed, manipulated between the thumb and forefinger, and tasted. Each cheese is treated individuality, and selected for specific customer needs. A lot of the cheeses are ready for eating after 12 months, some after18 months, a few after 24 months, and a very select few make it to 36 months and over. At this age they have the greatest complexity and depth of flavour, and a dense, fudgey texture - peppered with a gritty, calcium crunch. I remember tasting the 3 years cheeses at St Anotine, magnificent cheeses which the richest, pineapple, caramel, coffee, praline, biscuity flavours. One of the most memorable mouthfuls I've had. 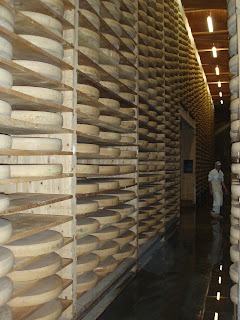 I work in a large,upscale cheese shop that has hundreds of cheeses from all over the world. The two year old Comté is one of my all time favorites!