“I love you, rotten,
Delicious rottenness.

I love to suck you out from your skins
So brown and soft and coming suave,
So morbid, as the Italians say.

What a rare, powerful, reminiscent flavour
Comes out of your falling through the stages of decay:
Stream within stream.”
So wrote D. H Lawrence on the medlar in his poem, “medlars and sorb-apples” from “Birds, Beasts, and Flowers”. 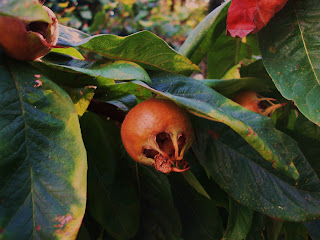 The medlar is a small fruit which to look at is somewhere between a small apple and a large rosehip, and is related to both. I have a small medlar tree which crops very heavily without fail each year. The tree can often be found in old orchards or growing feral in hedgerows, especially in the Midlands, Nottinghamshire and Kent – historically regions where medlars were popular.
When young, the fruit is coated in a fine peach-like down which is lost as the fruit matures and forms a rough, course skin. It is brown-russet in colour with a bowl shaped depression at the bottom end.
The medlar was grown as a food source since at least the 2nd century BC by the ancient Greeks, who valued the tree due to the fruits’ late-ripening. Traditionally the medlar would be the last fruit to be picked in the orchard, after an abundant autumn crop of plums, pears, apples and quinces, the medlar could be left on the tree until hard frosts began. But once picked from the tree, the medlar must undergo a unique preparation before it can be eaten. The fruit must be “bletted”, or rotted. Perhaps “controlled fermentation” sounds a little more appealing.
To blett a medlar, the fruits (hard and inedible from the tree), are put in a box and covered in sawdust. Hidden beneath the sawdust, the inside of the medlars break down from a hard, bitter, acidic flesh to a moist, brown, soft and fragrant paste ready for eating. D. H. Lawrence described the bletted medlars as having “wine-skins of brown morbidity” and “an exquisite odour of leave taking”. The smell is powerful and pungent, but not over powering; like the smell of an orchard in late autumn; full of wet leaves and decaying fruit. And the flavour of the medlar at this point isn’t dis-similar; a slightly alcoholic flavour, sweet and succulent, a little acidity and an earthy, woody, appley taste.
The Victorians scooped the soft pulp from the skins, separated the 5 large seeds, and mixed the fermented medlar flesh with cream and sugar and eaten as an accompaniment for port.
As much as I like the idea of this very antiquated fruit, I have to say, there’s something about the texture of a bletted medlar that I can’t quite stomach. However, I capture the aroma by making a medlar jelly, adding sugar dulls the more “fermented” flavours and brings out a honeyed, floral quality, not unlike quinces. To make the jelly, I chop the bletted medlars roughly, cover with water and stew for 30 minutes until very soft and pulpy. I strain this through a large square of muslin for 24hours – the juice must drip through very slowly to give a smooth-texture and clear appearance, never squeeze or apply any pressure to speed up the dripping.
Measure the quantity of medlar juice you have (discard the dry pulp left in the muslin) and add the same quantity of sugar. Slowly bring to a simmer, stirring continuously to dissolve the sugar. Once you are sure all the sugar has dissolved, bring the jelly to a rolling boil for 10 minutes before testing the set. When the jelly has the level of set you want, pour into sterilised jars and allow it to cool down and set.
The jelly is a beautiful shade of deep crimson, and is delicious served alongside game - with roast partridge, pheasant or mallard.
﻿
﻿
Posted by David_Jowett at Friday, October 21, 2011 4 comments:

The season for Mont d’Or has finally arrived!
After a long summer of grazing the hillside pastures of the Haut-Doubs and the Jura to produce milk for Comté d’estive and Morbier, small herds of the regions’ famous Montbéliarde have been moved into winter housing in preparation for the harsh alpine winter months.
It is now, when the cows are being fed only the purest, sweetest alpine hay cut and dried from May-August, that Mont d’Or (or Vacherin du Haut-Doubs) is produced. Not only has the cow’s diet changed, but the lactation cycle of the herd will be coming to an end, a time when the fat level of the milk naturally increases.
Calving is usually staggered in larger herds of cows, to give a continual milk supply with changes in milk composition at various stages of the lactation being lost in the volume of milk. A smaller herd will tend to “block calve” so all the cows give birth at around the same time, and are all on the same lactation cycle. This rich, fatty milk is better suited to making soft cheese than hard cheese (although Comté is always made using partly-skimmed milk), and so is utilised by making a very special cheese – one of Frances greatest soft cheeses. 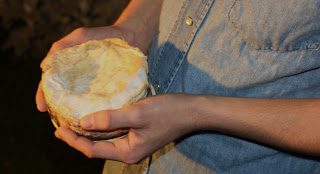 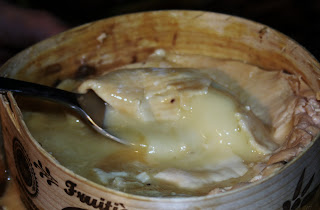 The famous spruce band which makes Mont d’Or such a visually striking cheese is tied around the cheese when the cheese is very young, before the rind has begun to develop. The spruce cambium (a thin, pliable layer between the bark and wood of a tree) serves a practical function – to hold the ripening cheese together as it develops a melting, almost liquid texture, and also imparts the most striking aromas to the cheese. An aroma of rubbed pine needles, of Christmas trees, of soft-wood resin. As the cheese ripens and this unmistakeable aroma begins to develop, a thin rind starts to form – a delicate geotrichum bloom which breaks down the firm paste of the cheese, giving a creamy texture and yeasty flavour. Fluffy white moulds coat the cheese and act with the geotrichum to ripen the cheese and also give the rind an undulating or crumpled appearance.  Once fully ripened, Mont d’Or will have a tender, delicate rind with a powerful aroma – not just of spruce, but of cream, cauliflower and cured meat.
Try baking a small Mont d’Or. Stud the cheese with thin slivers of garlic and small sprigs of thyme before sprinkling with a little white wine and baking for 25 minutes.
The cheese comes hot and molten from the oven, scented with garlic and thyme. Spoon the cheese over toasted pain de campagne, baby celery hearts, French mountain hams, saussie de Morteau, acidic little cornichons and maybe a salad of frisée dressed with the lightest drizzle of walnut oil. This is one of the best meals of the year. 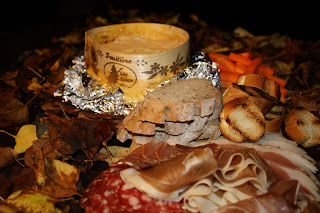 The Mont d’Or will be available from specialist cheesemongers until February or early March when the season draws to an end. The cows are dried off, for a few months before returning the hillsides for the first spring grazing after a winter under snow.
It is here where the herds will calf, and begin to produce milk for summer hard cheese making. Here they will stay, grazing in the summer until next autumn when the Mont d’Or season will start again, just as is has done for over 200 years.
Posted by David_Jowett at Saturday, October 15, 2011 No comments: