Two weeks ago, French dairy consultant Ivan Larcher came to the School of Artisan Food to teach us the art and science behind making lactic cheeses - a style of cheese popular in France. Think of the Loire Valley cheeses: St Maure, Valençay, Crottin, Pouligny St.-Pierre and all the different shaped Goat's cheeses which become available in Spring.
Ivan taught us the importance of measuring the acidity development during the ripening period of the milk and how to control it at different temperatures. He explained the acidity curve - a graph to display the correlation between time and acidity in milk maturation. The theroy of a lactic set cheese is that by deveolping lactic acid over a period of time, and with the aid of the smaller amount of rennet (to stabilize the coagulation) a fragile clot will form.
Each of us dairy cadets followed a slightly different recipe, with our milk being incubated at varying temperatures, % starter, and quantity of rennet.
I made cheeses with raw Goat's milk, geotrichum candidum, .5% starter, .8% rennet, and at 16°C. This took 24 hours to acidify to the correct level, pH4.6.
I ladle the curd directly into Crottin moulds. The curds firmed up over the next 24hours and were removed from the moulds and salted 48hours from ladling.


We matured our little Goat's cheeses for 14 days , by which time they had developed a wrinkly rind with a thin creamy breakdown.

The most beautiful day of the year so far! Scoring sun, Daffodils, blossom, Swallows.
Rural Buckinghamshire was delightfully pretty, and it was the Cheese makers market in Old Beaconsfield (red brick cottages, village green, 15th century church...and white Range Rovers everywhere.).
Over 40 artisan cheese makers from all over the UK had been invited by Premier Cheese, La Cave à Fromage and The Real Food festival organisers to the event, as well as a noisey Frenchman with some very good Langres (Beaconsfield is twinned with the town of Langres).

Most of the cheeses were very good indeed, but the stars for me were:
A raw milk cheese made down the road from Tobermory Distillery on the Isle of Mull. The herd of Ayrshire, Brown Swiss and Friesian cattle are fed partly on Draff - spent grain husks from the distillery, giving the cheese a paler colour then Somerset Cheddars, and yeasty, fruity, acidic flavours to the cheese. We tried a few different ages of the Cheese, the best being a 12month cheese with an initial harsh, salty acidity, but developing into a sweeter, cured-meat aroma.

Made at Whalesborough farm, near Bude in Cornwall, using milk from the farm's own herd. This is a delicous cheese washed in cider, encouraging the development of a sticky, pale orange rind, with a smooth, creamy breakdown. Very fruity, with  sweet and buttery layer beneath the pungent rind and a lighter, slightly acidic centre.

Cropwell Bishop are one of 6 Dairies licensed to make Stilton cheese. 8 months ago, the Dairy started making a limited amount of hand-ladled Stilton, predominantly for Paxton and Whitfield Paxton and Whitfield which is also made using traditional rennet (one of only two Stilton makers to do this). Hand-ladling the curd from the cheese making vat onto the draining table before milling is the most delicate way to handle the fragile curd, and subsequently results is a creamier, soft textured cheese. The use of traditional calves rennet as opposed to vegetarian rennet produces a cheese with a sweeter flavour and less bitterness. And the cheese was sweet and creamy, no bitterness or harsh acidity. It had a moist smooth texture, softer than most Stiltons.


It was a great day, eating cheese, talking to cheese makers and drinking cider in the sunshine. There should be a cheese market at Welbeck. Or in Stratford.
Posted by David_Jowett at Sunday, April 10, 2011 No comments:

During February I spent a few weeks making cheese at Ram Hall Dairy, near Coventry. This was one of my chosen work experiance placements for the School of Artisan Food. 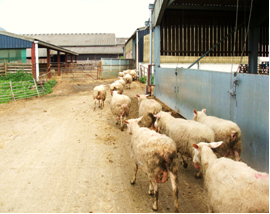 Ram Hall Farm is part of the Berkswell estate, comprising of 600 acres of permanent pasture and arable land. The farm is tenanted by Peter and Shelia Fletcher and is now run by their son, Stephan who made the decision to stop farming dairy cows in the late 80s due to falling liquid milk prices. Stephan started to build up a flock of dairy sheep for liquid milk sales, whilst his mother, Sheila went on a cheese making course at Nantwich, where she learnt how to make Caerphilly. After a couple of years building up the milking flock, the Fletchers found themselves with a surplus of milk, causing the cheese production to expand. Until this point, Shelia had been making small batches of cheese, about 12 a day, in buckets in the farmhouse kitchen. Soon the family found they needed a full time cheese maker in order to give the required attention to the cheese. One of the relief milkers, Linda Dutch was interested and went of a cheese making course, and Berkswell cheese was born! 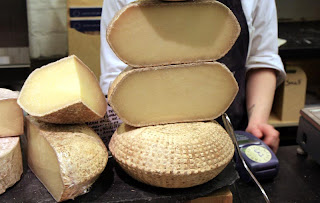 Berkswell Cheese at Neal's Yard Dairy
Almost 20 years later, and Berkswell has become know as one of the best Sheep's milk cheeses in the UK, a cheesey household name!
Whilst I was at Ram Hall, around 300 Sheep were being milked, giving enough milk to make around  300 cheeses a week, each weighing between 2-2.5kg.
Making Berkswell is hard work, but enormous fun! The curds are cut and scalded before being scooped out of the vats and squeezed, pressed and filled into the colanders. After a few days of turning the cheeses in the mould to allow for even drainage of whey and uniform shape, salt is rubbed on to each side of the cheese. The cheeses absorb the salt, over the next few days before being washed, and taken into a temperature and humidity controlled drying room for a week, and then into one of the cool maturing rooms, where the cheeses sit on wooded shelves for 4-6 months. 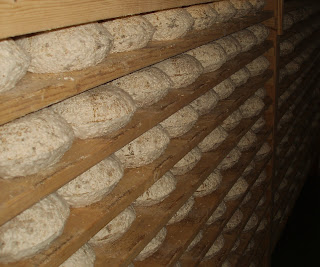 A few of the hundreds of Berkswell Cheeses maturing in the cheese store
﻿
In the maturing rooms, the cheeses grow wonderful rinds of multiple harmless moulds and yeasts, adding an indervidual character and unique aspect to every cheese.
No two batches of Berkswell taste the same, one of the exciting qualities which constantly draws me to artisan cheeses. I tried an 11 month old cheese, a cheese made in March the previous year when the sheep were on silage. It had an almost granular texture, like that of an aged Pecorino, but with extraordinarily complex and deep flavours: nutty, toasty, lanolin and savoury. In contrast I tried a cheese made in July when the sheep were grazing on ancient pastures surrounding the farm. A moister cheese, tasting of sweet hay and summer meadows but with a lively, fruity acidity. Both very different but equally wonderful cheeses.
Posted by David_Jowett at Sunday, April 10, 2011 No comments: